Jennifer, a Had The Radish reader (can you believe it?), recently came into possession of an actual loaf of Sirloin Saloon bread, and as she said in the comments section “…it is the yummiest bread (she) had ever eaten…”

Comparing it to the pictures of my recipe attempt, she said the real loaf was extremely heavy, dense, appeared darker and had a lot of seeds in it.  She then set off on her own journey to replicate the bread.

On her first attempt, she combined 4 different recipes and added soaked bulgar wheat to see if those were the “seeds”.  That wasn’t it.  On her next attempt, she nearly doubled the amount of rye flakes, and skipped the soaking step and used high gluten flour from the health food store, and eureka!  she got a result that was “extremely close to the original” although still a bit light in color to her eye.

She generously provided me with a picture of the real Sirloin Saloon bread (only half a slice, because, really, it doesn’t stick around waiting for pictures), and one of her copycat recipe.

Here is the real bread from the restaurant: 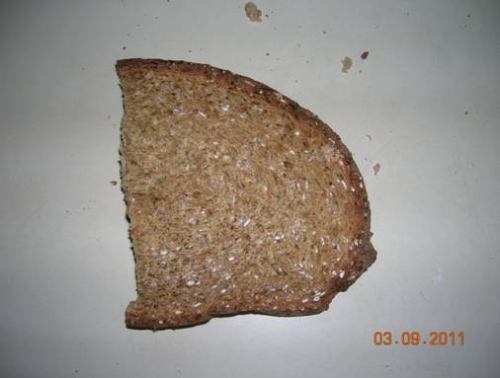 And here is a slice from the recipe she developed:

Next batch I make, I’m going to increase the rye flakes and skip the soaking step (but adding a cup of water to the mix), and bake it at 400/350.  Thanks for your insight and thanks for having a conversation with me in the comments section about some yummy bread.

Here is a side by side comparison of the recipes:

(you can see Jen’s recipe method here, near the end of the comments)

This entry was posted in Recipes, Uncategorized. Bookmark the permalink.