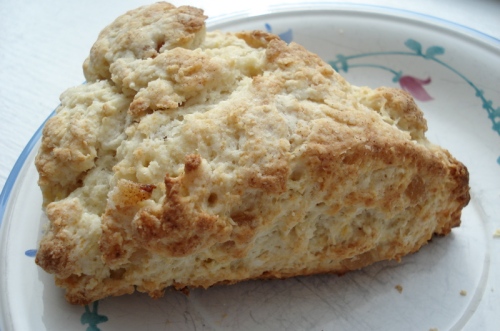 My grandparents on my father’s side were Scottish.  I never knew my Grandfather, he was one of the few Vermont fatalities of the Hurricane of ’38,  but that is a story for another time.

My Gram died when I was just 8.  I have very few long memories of her, but I do have a few short, specific memories.  The skin on her upper arm was very soft and cool, and I liked to pat it and feel it jiggle.  Her eyes were sparkly and crinkly and kind.  If I try really hard, I can almost remember her laugh.  It was just a little chuckle.  But I can never really recall it; it remains just out of reach, like a word stuck on the tip of my tongue.  She always wore a dress and she drove a Volkswagen Beetle.  She had strong-smelling green pine soap in her bathroom and face cream in a little pink  container shaped like a rosebud and it smelled like roses.  She had a gigantic glass candy dish, and no matter how carefully you tried to sneak candy, the lid always clanked and she would say from the other room, “Take some candy if you would like.”

Once, I slept over and we played bingo.  When I would win, I would always get a prize.  The prizes were always Native American in theme; like a plastic Indian-head key chain, or a small beaded change purse.  I found out later that these were things that she had gotten in return for donations she had given to a Native American charity.

When I was sick with a cold, she would always make me a fruit basket and bring it to me.  It had an orange, an apple and a banana, but the best part was there were always a couple of comic books tucked inside.

Re-reading this, I see I have used the word “always” an awful lot.  I was going to edit them out, but I think that is the essence of what I remember about her, she was always…always kind, always soft, always loving, always predictable, always dependable, until the day she just wasn’t there anymore.  To me, it was shocking and unbelievable. It was as if, without warning, the sun just didn’t rise one morning.

My Gram had a few things she was known for baking.  Fudge, doughnuts, oatcakes and scones.  I don’t have her scone recipe, this is actually from my childhood neighbor, Mrs. Troup.  They must have been close to what my Gram made, because I remember my Dad saying, “I don’t know how an Italian woman can make such good Scottish scones.”

I make my scones two ways:  plain and with ginger and lemon.  The plain is traditional and what my Gram would have made.  The ginger-lemon variation is just me being uppity.

And a word on pronunciation.  In our family, we always pronounced them to rhyme with “gone”… skawn.  Everyone else pronounces them to rhyme with “bone”.  I was heartened to hear on a trip to Scotland that they too pronounced it “skawn”.  It was just another bit of evidence that those things they sell in Starbucks might not be recognized in the Highlands.  Sorry, I’ll get off my soapbox now.

Here’s how I make authentic Scottish scones, and a modern variation.   The recipe follows at the end.

For the ginger-lemon scones, I dice about 1/2c of crystalline ginger into a small dice, and grate the zest from one lemon. 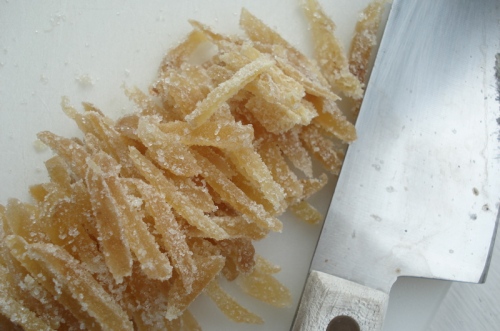 Then I cut up the cold butter into small cubes.  The original recipe, typical of Scottish and depression-era frugality I think, called for “oleo”.

I then cut the butter into the dry ingredients until I get a mixture that looks like a combination of cornmeal and small peas.  Sometimes, I use my fingers a bit to incorporate the butter, but I am careful not to melt it.

Then I add buttermilk, and stir it until just combined.  The dough will be shaggy and a little sticky.

I turn it out onto the counter and knead it only once or twice to gather it together.

Then I lightly pat it into a circle about 8″ in diameter and about 1/2″ thick.  I prick the dough with a fork, and cut the circle into wedges using my bench knife.

I place the scones on an ungreased cookie sheet. 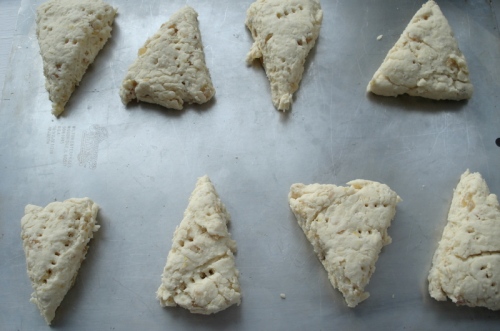 They should look a little bumpy and craggy.  That way, when they bake, they have lots of crisp edges.  If they look too smooth at this point, I worry that I overworked the dough and they may be tough. 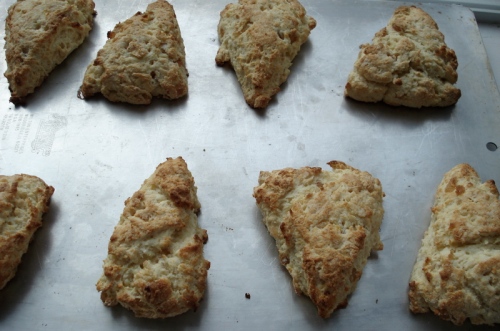 The plain ones are quite plain, and good with a little jam.  The ginger lemon scones are also good with jam or on their own.

Cut this into the dry ingredients.

Add the buttermilk and stir until just combined.  Turn out onto a counter and knead once or twice to bring dough together.  Quickly and gently pat into an 8-9″ circle about 1/2″ thick.  Prick with fork and cut into 8ths.  Place on ungreased cookie sheet and bake 10-12 minutes.

Add these ingredients to the dry ingredients.  Rub the ginger pieces in the flour to coat them with flour and keep them from clumping.  Proceed with the recipe as written.

This entry was posted in Recipes, Uncategorized and tagged recipe. Bookmark the permalink.